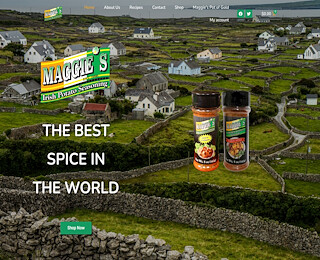 Maggie’s Irish Potato Seasoning wouldn’t exist without the contributions of Thomas Armstrong and his ancestors. The Armstrong family originated from Donegal, Ireland, specifically Gorton Township. Eventually, the Armstrong ancestors migrated to Tangipahoa, Lousiana, taking along their Irish recipes. During Thomas Armstrong’s stay in the bayous of Lousiana, the family picked up a few cooking lessons, adding an extra zing to an already mouthwatering creation. The traditional Irish seasonings have made an impact on several taste buds.

Maggie’s Irish Potato Seasoning officially launched in 1996 in a quaint Missouri town called Stewartsville. While the small venue seated approximately fifty patrons, the restaurant made its mark on the local community with its most iconic dish, Irish potatoes. Maggie’s Potato Seasoning grew an impressive reputation that brought people from far and wide to get a taste of the spicy Irish-Cajun cuisine.

The Armstrong family’s recipe became perfected through the years, with each generation adding a personal touch. The flavorful seasoning has an original flavor and a spicier Cajun counterpart. With two favor options to choose from, it is easy to see why Maggie’s has become a staple at every family meal.

Maggie’s Irish Potato Seasoning works with oven-roasted potatoes or those cooked in a microwave. However, the unique blend of spices compliments several food dishes besides potatoes. The seasoning developed by the Armstrong family comes in multiple size varieties, such as five or eight-ounce bottles. A standard Cajun potato recipe calls for roughly one-fourth teaspoon of seasoning, but users can add extra to jazz up a Cajun spiced potatoes recipe.

One eight-ounce bottle of cajun seasoning is enough to flavor a twenty-five-pound bag of potatoes. The flavor is potent and distinctively fiery, making the seasoning ideal for shrimp and other seafood dishes. Crawfish boils are another Cajun meal that this seasoning makes even tastier, and it is never a bad idea to add Maggie’s to your meal.

Taste Description and Other Helpful Information

Using this unique cajun seasoning, customers can spice up any meal. After mixing in a quarter teaspoon of Armstrong’s family seasoning, it merely takes fifteen minutes to create flavorful spiced potatoes. Cajun spices are a dime a dozen, but the Armstrong family recipe outshines other cajun seasonings exponentially. Let your taste buds rejoice!